16 ASTOUNDING SIGNS AND SYMPTOMS OF FIBROMYALGIA. #11 IS VISION DISTURBANCES 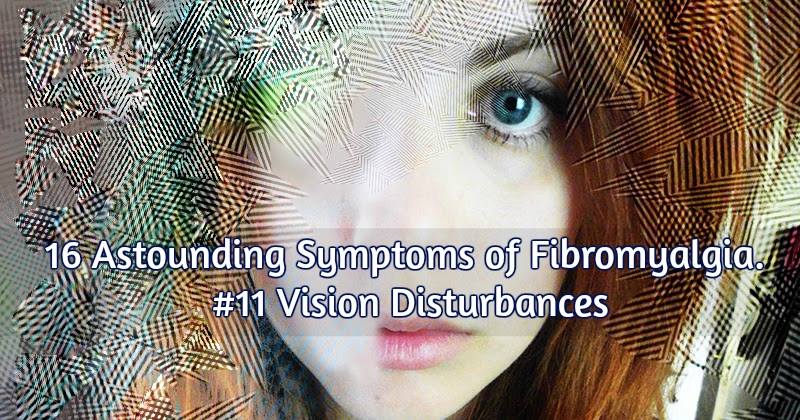 Fibromyalgia is a common disorder that causes widespread pain throughout a person’s body along with other symptoms that vary from one person to another.

Although there is still much to be learned about this condition, current research points toward the possibility that fibromyalgia symptoms arise due to changes in the way a person’s brain processes pain signals from their body. It is also noted that women tend to be affected more often than men, and it can strike at any age.
For many people, fibromyalgia symptoms occur shortly after physical or psychological trauma, yet some people also develop the symptoms slowly over time. The symptoms can fluctuate from one day to the next, and some people experience long periods of remission.

Although fibromyalgia has no cure, treatments tend to focus on pain management and stress relief strategies to ease the following symptoms.

Many people are unaware of how devastating fibromyalgia can be for the patient. Below are 16 signs and symptoms of fibromyalgia.

16 Signs and Symptoms of Fibromyalgia

The widespread pain experienced by fibromyalgia sufferers is its hallmark symptom. For pain to be considered to be widespread and be considered fibromyalgia pain, it must occur on either both sides of a person’s body or include pain both above and below the waist. This pain may also be centralized in specific trigger points on a person’s body that spread the pain to different regions when pressure is applied.

Researchers are still attempting to identify if mood disorders exist separately of fibromyalgia or if they occur due to the disruptive symptoms. However, the majority of patients with this condition will also experience periods of sadness, anxiety and hopelessness that may be worsened with fibromyalgia symptoms are severe.

Lack of focus, inability to pay attention and memory lapses are all cognitive symptoms of fibromyalgia. Those with fibromyalgia often refer to this set of symptoms as “fibro fog.”

Trouble falling or staying asleep is another sign of fibromyalgia. Many sufferers experience frequent night wakings and other disruptions that lead to further feelings of exhaustion during the day.

Although no one knows why, the majority of people with fibromyalgia also have this disorder. Diarrhea, constipation, pain and bloating and nausea are symptoms that are experienced by people with both of these disorders.

Cardiac symptoms can be especially upsetting to fibromyalgia patients, yet testing tends to reveal no underlying cause. Heart palpitations do tend to respond to deep breathing and other relaxation techniques.

Chronic migraines affect more than half of those diagnosed with fibromyalgia. The majority of these headaches are classified as causing severe pain, and they occur three or more times a week. Many people experience multiple headaches during a single day.

Temporomandibular joint dysfunction (TMJ) disorder affects about one-fourth of those with fibromyalgia. Facial pain that originates in the jaw may also spread to a person’s head or neck. Usually, the pain is associated more with the ligaments and muscles within a person’s jaw area rather than the joints.

Irritable bladder, frequent urinary infections and incontinence are also found in those with fibromyalgia. Burning with urination and abdominal pain may feel more severe to people with this disorder.

Dry or burning eyes, blurred vision and difficulty focusing are a few ways that fibromyalgia can disrupt a person’s vision. These symptoms may occur along with headaches or dizziness. However, they can also occur alone.

With fibromyalgia, it can often feel as though a person’s senses are in overdrive. Bright lights and strong odors may increase other symptoms such as headaches. A person may also discover that they are more sensitive to medications, and they may have a greater chance of developing side effects.

The widespread pain and fatigue caused by this disorder can also lead to some people having trouble with their balance. For this reason, it is important for anyone with this disorder to guard against falls. Dizziness may occur along with balance issues.

Random tingles in a person’s extremities with no known cause could just be another symptoms of fibromyalgia. Carpal tunnel syndrome is also commonly found in people with this disorder.

In a healthy person, exercise releases pain-relieving endorphins, however, a person with fibromyalgia will experience increased pain after even moderate workouts. Breaking exercise sessions into several, shorter workouts can help to alleviate pain sensitivities.