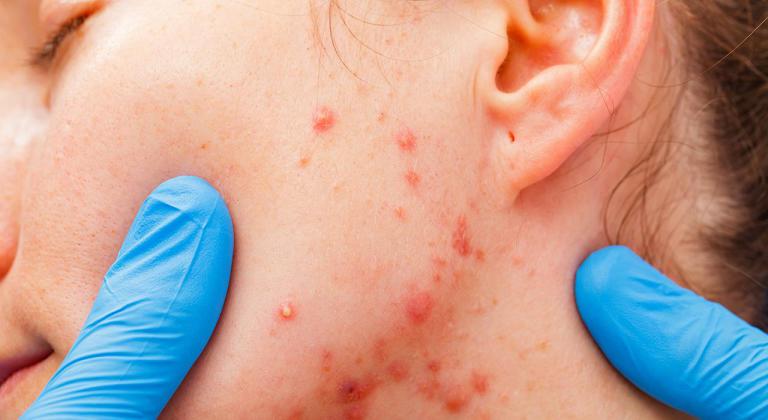 Fibromyalgia is a widespread chronic pain syndrome that occurs mostly in women 20 to 50 years old. The National Institute of Arthritis and Musculoskeletal Diseases estimates that five million people in the U.S. suffer from fibromyalgia. Even though it’s so wide-spread, the cause of fibromyalgia is still unclear, and fibromyalgia symptoms can be just as varied and complex.

Fibromyalgia is diagnosed as a syndrome–a collection of signs, symptoms, and medical problems–not just by one marker. The three  symptoms that point most directly to a diagnosis are

Knowing these symptoms and if they affect you can help when it comes to diagnosis. It takes years for the average person to be diagnosed. This is because the symptoms of fibro overlap with many other disorders. The following video gives a bit more information about this pain syndrome.

Pain is one of the most common symptoms of fibro, and it’s a required component of any diagnosis. But, as Everyday Health explains:

That means that an activity that caused you pain one day might be fine the next, and vice versa. Even so, here’s how fibro pain symptoms can affect your life.

The symptom that fibromyalgia is known for is most certainly chronic pain throughout the body. Specifically, the pain has to occur on both sides of your body as well as above and below the waist to be diagnosed as fibromyalgia. The pain can travel to every other part of your body and the intensity of the pain can vary. Fibromyalgia also has the tendency to wax and wane, so pain can vary on any given day and even during the same day.

The National Fibromyalgia and Chronic Pain Association reports that the following could all affect pain levels:

Most patients describe the pain as a stiffness or aching starting in specific areas. Fibromyalgia tends to begin in the neck and shoulders area and spread out to the rest of the body from there. It is also common for pain to feel like it is coming from the joints even though inflammation or swelling is not present. Tender points are also common and generally produce a sharp pain when pressure is applied.

In order to be diagnosed as a chronic condition, this pain must be present for at least three months and be unresolved or recurring.

Muscle spasms may be a painful fibro symptom, or they may simply be an irritation as the muscle clenches and unclenches on its own. This can interfere with sleep and daily activity.

Headaches are a common symptom of fibromyalgia. Some patients even experience extreme migraine pain. The intense pressure or throbbing from these migraines can extend further down the body into the neck, shoulders, and upper back. These headaches are often triggered by environmental factors such as:

These headaches can last for days and may be severe enough to disturb sleep.

When fibromyalgia patients are pain-free, their first instinct may be to jump up and get things done. They may clean their house, meet friends for lunch, then go for a hike in the afternoon with their kids. While these are all wonderful things, the result of this increased activity can be even worse pain later that night or the next day.

Doctors diagnose fibro by 18 tender points on the body. These are symmetrical points located both above and below the waist. Fibro sufferers may experience increased tenderness in these areas when a flare-up is imminent, or they may feel these tender points nearly all of the time.

Fibromyalgia and irritable bowel syndrome are closely linked, as pain and stiffness are frequent problems in both conditions. It is quite common for someone to have both of these disorders at the same time. IBS is another chronic pain condition that can lead to:

Pain can be so severe as to make a fibro patient sick to their stomach. This may cause a change in diet that could lead to other symptoms.

Some of those with IBS experience constipation as their primary manifestation of this syndrome.

Excessive gas can either be a symptom of IBS, or it may occur as a result of dietary changes due to nausea or other causes.

For those fibromyalgia patients who also experience IBS, if they do not suffer from constipation or excessive gas, they may find that their primary symptom of fibro is diarrhea.

Mayo Clinic reports that fibro often coexists with other conditions, such as interstitial cystitis or painful bladder syndrome.

One of the strangest effects of fibromyalgia is its distortions of a patient’s sensitivity to pain, cold, touch, or even sensory inputs like smell.

Those people with chronic pain conditions experience changes in their brain that make their body more sensitive to pain over time. This is a common fibromyalgia symptom.

Any involvement of the nerves may cause a tingling sensation in hands and feet, often referred to as feeling like “pins and needles.” SpineHealth notes that:

“Approximately 25% of fibro patients report ‘poor circulation’ or numbness and tingling which is not in a radicular pattern and typically involves arms and hands. However, a physical examination reveals normal muscle strength and sensory testing, with no inflammatory or arthritic features.”

In addition to increases in sensitivity to pain (which merits its own focus), many fibro patients also report increased sensitivity to.

But, because of an increased sensitivity to cold, fibromyalgia patients may find themselves reaching for a sweater on the sunniest days.

Fibromyalgia diagnosis tends to focus more on the physical symptoms, like pain and fatigue. This makes sense, as these are the easiest indicators to identify and measure. However, there are a number of mental and cognitive fibromyalgia symptoms that occur from this disorder that can also have a large impact on quality of life.

16. Inability to concentrate, or “fibro fog”

The most common mental fibromyalgia symptom is what is known as fibro fog or brain fog. This includes many different cognitive difficulties, such as:

This fibro fog is usually caused by overstimulation, high stress, lack of sleep, and some medications. This fog can feel like you are taking cold medicine. For many patient’s, it’s one of the most frustrating fibromyalgia symptoms on a day-to-day basis.

17. Problems with balance and coordination

Many with fibromyalgia also report having trouble balancing upright, or maintaining basic coordination. This could be due to fatigue certainly, but is also a separate symptom of this syndrome.

Between the lack of sleep that is often a symptom of fibromyalgia and the amount of effort even the smallest task takes during a flare-up, fibromyalgia patients can be deeply fatigued. Many who have fibromyalgia experience sleep disturbances. The constant pain itself can be exhausting. Those who suffer from fibro tend to report that they have trouble obtaining restful sleep and feel tired when they wake up. Exhaustion is so synonymous with fibro that some experts believe that without sleep disruption and chronic fatigue, it cannot be considered a true case of fibromyalgia.

Fibro sufferers have a way to describe this. They call themselves “spoonies,” comparing the amount of energy they have each day in terms of the number of spoons they have. If a fibromyalgia patient has ten spoons for a day and they use eight getting ready for work, they know they have to make adjustments to rest of their day.

If you have fibromyalgia, you’re also more likely to experience mood disorders.

As with all chronic pain patients, fibromyalgia sufferers have an increased chance of developing depression as a direct result of their condition. Research has shown that those diagnosed with fibro are three times as likely to have depression compared to those without it. Depression is one of the most important symptoms to determine early as it can be difficult to self-identify. It can also lead to other negative effects that can exacerbate other fibromyalgia symptoms, such as:

In more advanced cases, it can lead to a sense of worthlessness and thoughts about death. This can be exacerbated by their inability to regularly attend therapy. In addition, when depression is comorbid with a chronic pain condition, the condition will generally not improve unless the depression is also treated.

When fibromyalgia patients feel good, they may be almost frenetic in their desire to do things. Whether playing with their kids or simply getting household chores done without pain, this can result in rebound pain later on.

Waiting for the next painful flare-up can result in a constant low-level hum of anxiety. In some patients, this anxiety may begin to grow into a fear of leaving the house, just in case a flare-up should begin. This can also manifest as a panic attack if fibro symptoms flare-up suddenly far away from home.

As anyone might expect, having any chronic pain condition may cause the person suffering to feel irritable and short-tempered. However, for fibro patients it’s more than that.

Many patients have reported that their emotional reactions are much stronger and they have less control over how they express them. Irritability is one of the most common manifestations of this and this sensitivity can greatly increase with a lack of sleep. This sensitivity is true for negative and positive emotions alike.

Mood swings can also have a big impact on the everyday life of fibromyalgia sufferers. Many people diagnosed with fibromyalgia can go from happy to angry in a minute or less. Very often the sudden changes in mood are inexplicable, which is why it can have such a devastating effect on professional and persona life.

The stress of painful fibromyalgia flare-ups can cause sufferers to experience post-traumatic stress disorder type symptoms such as an inability to relax and hypervigilance. This high level of constant stress can lead to other health issues.

There are other fibromyalgia symptoms that are related to, but don’t directly fit in any of the other categories. Those include the following.

Chronic pain patients often experience sleep disorders, and fibromyalgia patients are no different. Pain may make it difficult to get comfortable enough to fall asleep, and the slightest movement may result in pain that jolts them awake.

“Normally, there are several levels of sleep and getting enough of the deeper levels of sleep may be even more important than the total hours of sleep. Patients with fibromyalgia lack the deep, restorative level of sleep, called non-rapid eye movement (NREM) sleep. Consequently, patients with fibromyalgia often awaken in the morning without feeling fully rested, even though they seem to have had an adequate number of hours of sleep time.”

Especially in the morning, joint stiffness can be a common symptom of fibromyalgia. But it’s a double-edged sword: the more a patient moves the less stiff they will be, but pain often makes movement very difficult.

“In a report by the National Fibromyalgia Association, women with the condition have more painful periods than usual. Sometimes the pain fluctuates with their menstrual cycle. Most women with fibromyalgia are also between the ages of 40 to 55 years old. Research suggests that fibromyalgia symptoms may feel worse in women who are post-menopausal or are experiencing menopause.”

27. Increased chance of other health conditions

While not a direct symptom of fibromyalgia, fibromyalgia symptoms can greatly affect a person’s ability to participate in their normal routines and activities. If these include a regular exercise routine that is no longer regular or as vigorous, a fibromyalgia sufferer may find themselves with a higher body-mass index. This can lead to other health issues, such as diabetes and cardiovascular disease.

MedicineNet also reports that: “Fibromyalgia can occur by itself, but people with certain other diseases, such as rheumatoid arthritis, lupus, and other types of arthritis, may be more likely to have it.”