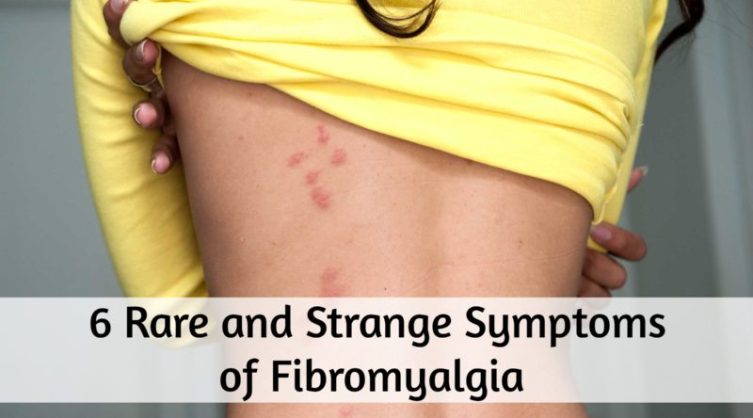 Click Here to Visit the Store and find Much More….

This is one of the scariest of the rare symptoms of fibromyalgia. Any time you feel severe chest pain, it’s normal that your first worry will be that you’re having a heart attack. Many fibro sufferers deal with chest pain due to non-cardiac causes, also called angina. If you experience this, it will feel like a crushing, squeezing pressure in your chest. An attack of this symptom can be very scary and will probably send you to an emergency room, only to be told that you’re fine. However, fibromyalgia sufferers can have heart disease the same as anyone else can, and it is the number-one killer of Americans. If you feel chest pain, get it checked out because it’s much better to be safe than sorry.

Sensitivity to Noise and Light

If the nearby table of shrieking little kids at a restaurant seems to bother you more than everybody else, it’s likely a fibro symptom. Although most doctors will tell you that sensitivity to noise, particularly high-pitched or exceptionally loud noise, isn’t a fibromyalgia symptom, enough fibro sufferers do experience this issue that it shouldn’t be considered rare. Many fibro sufferers are also extremely sensitive to bright lights.

Alcohol Intolerance and Increased Side Effects of Medication

You start feeling like you’ve had way too much alcohol after only a glass or two of wine, while your friends can drink all night long. Or you get every possible bad side effect from medications, leading your doctor to be suspicious about why drugs never seem to help you. This is actually not uncommon in people who have fibromyalgia, though nobody knows why.

Difficulties with Your Senses

Many fibromyalgia sufferers feel like their vision isn’t quite right. You may have difficulty with driving at night or you may lose the ability to distinguish the difference between colors. Some people are more sensitive to strong odors, which is not the same as being allergic to specific fragrances. Some fibro patients even lose their hearing.

Fibromyalgia patients often have problems with their skin. You may experience the sensation that your skin is crawling, itching, prickling or burning, a symptom called parasthesia. Some fibro sufferers deal with acne far beyond the adolescent years. Still other people with fibromyalgia have mottled skin that looks like it has red blotchy spots.

Overgrowth of body tissues can affect you both internally and externally. In women, internal tissue overgrowth leads to a painful condition called fibroids, which cause benign tumors to grow in the uterus. The most common symptoms of fibroids include heavy bleeding and extremely painful periods. Fibroids may also cause pelvic pain. Other forms of tissue overgrowth include frequent ingrown hairs, adhesions and heavy, splitting cuticles. For unknown reasons, tissue overgrowth may be more common in those with fibromyalgia.

Because the medical community still doesn’t have a great understanding of fibromyalgia, it’s entirely possible that the rare symptoms of fibromyalgia your doctor dismisses may indeed be part of your illness. Regardless of the cause of your symptoms, it’s important to be open with your doctor and committed to taking care of yourself.

The Different Stages of Fibromyalgia (6th is so Scary…!)

The Different Stages of Fibromyalgia (6th is so Scary…!)