‘It was just amazing’: Solon company’s laser therapy device one of first to offer pain relief for fibromyalgia 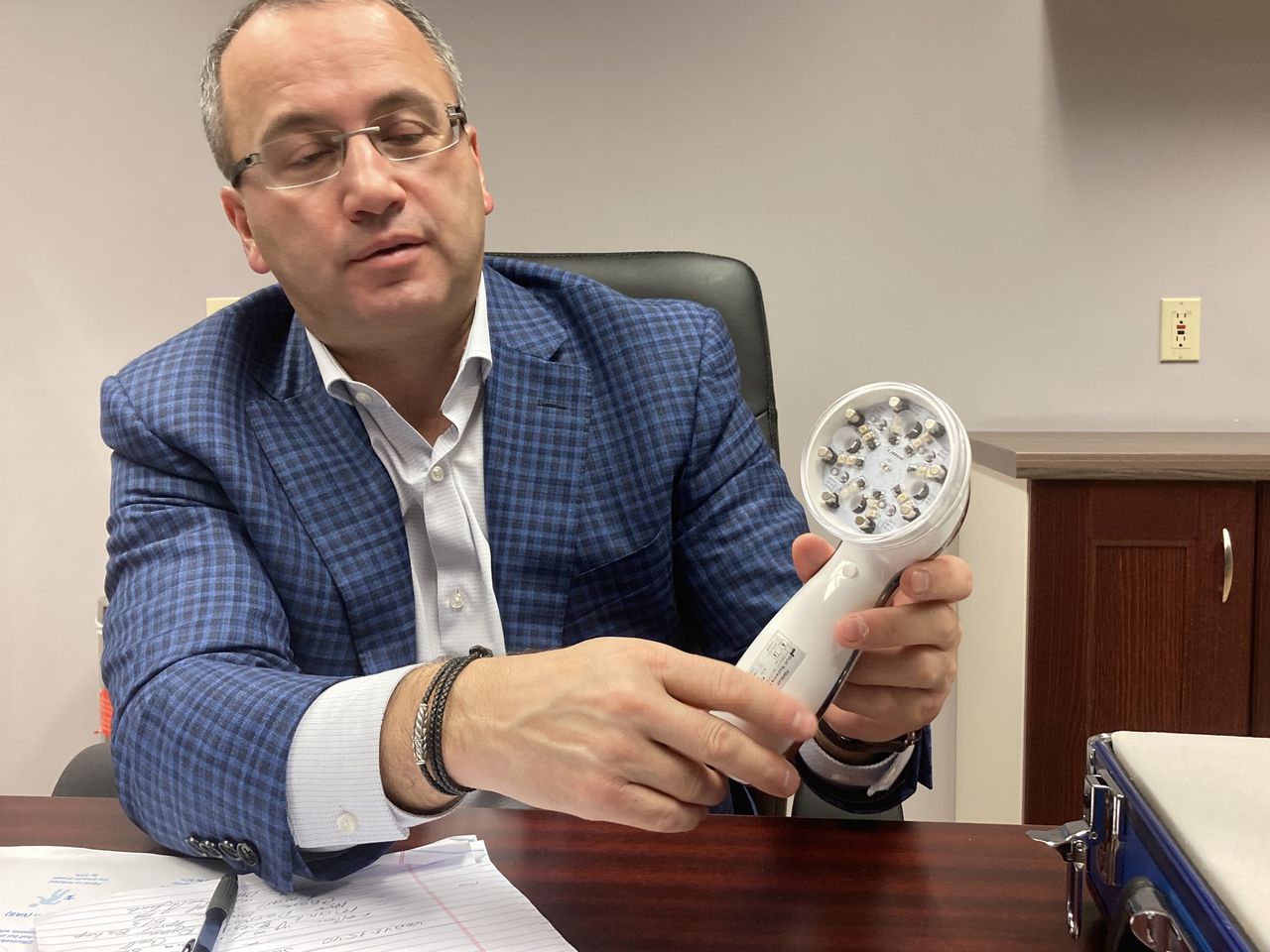 SOLON, Ohio — Whenever Kimberly Kazdan’s dogs jumped on her legs, the pressure felt like knives stabbing her muscles.

Her pain, fatigue and lack of sleep were symptoms of fibromyalgia, an illness characterized by widespread musculoskeletal pain. Kazdan, 54, a nurse living in Rochester, New York, spent years missing out on family activities and battling fatigue until she found relief in a laser therapy device created by a Solon medical device company.

“I have never felt so good in my in my life,” Kazdan said. “I could actually rub my legs with my hands, which is something that I hadn’t been able to do for a long time. It was just amazing to me that it took away that muscle pain.”

The company recently received Food and Drug Administration approval for one of the first laser therapy devices designed specifically for fibromyalgia patients. Multi Radiance Medical makes laser therapy equipment for the treatment of other conditions such as chronic pain, muscle stiffness and spasms.

The FibroLux therapy laser is a portable, handheld device that’s pointed at various parts of the body to bring temporary relief of pain. It works by using light energy, in the form of photons — the energy units that make up light.

Photons can pass through the skin. When laser light penetrates cells, it increases blood circulation to painful, constricted joints, as well as shutting down pain signals, in many fibromyalgia patients.

“When you talk about improving quality of life, it allows people just to go to the store without fear that they’re going to have pain when they get back,” said Tom Kelly, global president for Multi Radiance Medical. “Are you having a hard time standing up and just walking into the kitchen to get a glass of water? If you can relieve that (worry) for a patient, that’s life changing,” Kelly said.

Fibromyalgia affects an estimated 5 million to 8 million Americans, and can be extremely debilitating for those with severe symptoms, according to the National Fibromyalgia Association.

This disorder is characterized by widespread musculoskeletal pain along with fatigue, sleep, memory and mood issues, as well as headaches. Researchers believe that fibromyalgia amplifies painful sensations by affecting the way the brain and spinal cord process painful and non-painful signals.

Women are more likely to develop fibromyalgia than men. There is no cure, but treatment focuses on relieving symptoms.

The company is marketing its FibroLux therapy laser to rheumatologists who treat fibromyalgia patients. Multi Radiance Medical works with rehab clinics, sports medicine, chiropractic and veterinary clinics. (release) Its technology is used in more than 30 countries.

“(FibroLux is) a paradigm shift because it’s one of the first medical devices and certainly the first laser cleared for the use of fibromyalgia,” Kelly said. “Most other treatments have been pharmaceutical.”

Clinicians will probably rent the therapy laser, which will cost between $15,000 and $20,000. Patients will go to a clinic to use the laser therapy device several times a month, said president and CEO Max Kanarsky.

While no special goggles or room are needed to use the device, it is not recommended for home use, Kelly said.

The company began investigating the use of its existing devices on athletes’ muscles before exercise. Researchers found that laser therapy resulted in improved performance, faster recovery, and less fatigue, inflammation and injuries.

That led to the question of whether laser therapy could treat diseases involving musculoskeletal pain such as fibromyalgia.

“Some of the feedback from patients was that it was life changing treatments because nothing else was working,” Kanarsky said.

Prior to FDA approval, FibroLux was tested in a placebo-controlled, randomized, double-blind trial conducted across three test sites in Brazil. The device reduced pain and improved quality of life for patients who were treated with a placebo.

The trial included 90 women. About 80% of trial subjects in the active treatment group reported being “very satisfied” with the study outcome compared with 51% of trial participants who received a placebo.

Nearly 18% of trial participants treated with the device reported side effects — such as slight increases in pain/tension, itching, spasms, redness at the treatment site, drowsiness, headache and blurred vision.

The data was presented at a 2020 medical conference, and was published in the peer-reviewed American Journal of Physical Medicine & Rehabilitation.

More than 80% of patients with Fibromyalgia share cervical spine abnormality

More than 80% of patients with Fibromyalgia share cervical spine abnormality

‘It was just amazing’: Solon company’s laser therapy device one of first to offer pain relief for fibromyalgia