Jeff Sessions doesn’t give a shit about the opioid epidemic.

During an address at the U.S. Attorney’s office in Tampa, Florida this week, Attorney General Jeff Sessions said that people who suffer from chronic pain should simply “take an aspirin and tough it out.”

Sessions, whose opposition to medical marijuana is well known, attempted to tackle the subject of opioid addiction in the U.S., saying pharmaceutical companies are prescribing “too many opioids” — a sentiment that people from across the political spectrum would agree with.

But Sessions’ next statement demonstrated a profound misunderstanding and oversimplification of chronic pain sufferers.

“People need to take some aspirin sometimes and tough it out,” he said according to the Tampa Bay Times. “You can get through these things.”

“That remark reflects a failure to recognize the severity of pain of some patients,” Twillman said. “It’s an unconscionable remark. It further illustrates how out of touch parts of the administration are with opioids and pain management.”

In a speech at the Heritage Foundation this week, Sessions blamed the opioid crisis partly on marijuana in a rehash of the old ‘pot is a gateway drug’ theory.

“The DEA said that a huge percentage of the heroin addiction starts with prescriptions. That may be an exaggerated number; they had it as high as 80 percent,” Sessions said. “We think a lot of this is starting with marijuana and other drugs too.”

While people’s first illicit drug is often marijuana, researchers have cautioned that there’s no solid evidence that marijuana use causes harder drug use. It’s possible, instead, that people use pot before other drugs simply because marijuana is more accessible than other illegal substances; after all, many people’s first drugs are alcohol or tobacco, which are both legal (for adults) and relatively easy to get, and we don’t assume that will lead to heroin use.

Watch Sessions at the Heritage Foundation in the video below: 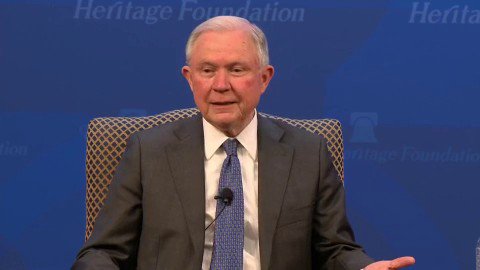 WATCH: Attorney General Jeff Sessions says his goal for 2018 is to see a further decline in prescriptions of opioids, and says, “we think a lot of this is starting with marijuana and other drugs.”