What is cervical stenosis? How It is Connected With Fibromyalgia 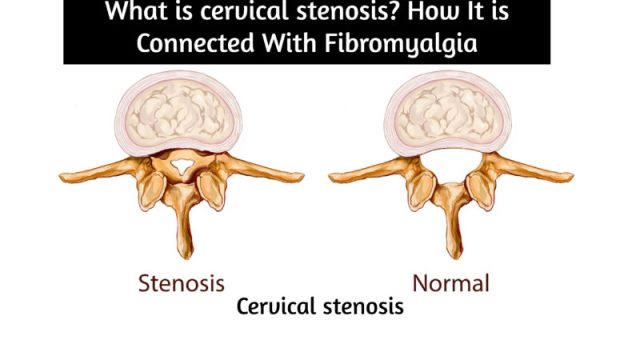 What is cervical stenosis?

Cervical stenosis is a narrowing of the spinal canal between vertebrae C1 and C7 in the spine due to compression. This compression affects the spinal cord and nerve endings. It can result in the loss of bladder control, difficulty in keeping balance, numbness or weakness in arms or legs, muscle weakness and loss of muscle control.

It is sometimes referred to as a “bulging disc” issue, where the compression has become so severe the vertebrae of the spine are bulging out for lack of cushion and pressing or cutting into the spinal cord and nerve endings. It is a degenerative disorder that is rarely diagnosed before the appearance of advanced symptoms. Common treatments for it include medication, exercise, physical therapy and sometimes surgery to relieve the compression on the spinal column.

Who is at risk?

Cervical stenosis can start for many reasons in the human body, including high impact repetitive activity, poor posture and body trauma. It is also a common disorder that occurs as a result of the aging process. It occurs more frequently in women over 50, due mostly to a lack of muscle tone and strength. It is also common in men over 50 as well, but typically noticeable later in life than with women.

What is the relationship between cervical stenosis and fibromyalgia?

The relationship between cervical stenosis and fibromyalgia is complicated. Many of the initial symptoms of both can cause them to be mistaken for each other. Fortunately, with the recent development of blood tests and brain scans to diagnose fibromyalgia, combined with the x-ray diagnostics available for cervical stenosis a misdiagnosis is getting to be less common.

However, there is increasing evidence that nerve damage and its possible role in fibromyalgia may be stronger than initially thought. This is leading many physicians to believe that there is a stronger relationship between cervical stenosis and fibromyalgia than ever before.

What can you do?

You and your doctor can make sure to monitor your health to spot the symptoms of both disorders and treat them accordingly. If you are not showing signs of cervical stenosis, it is important to remember that a diagnosis of fibromyalgia raises your risk for developing it. Fibromyalgia and its pain and stiffness are most likely to decrease the amount of regular physical activity that you do in your life.

That decrease can set the stage for increased compression in the range of your spine between C1 and C7 that will then lead to spinal stenosis at a much earlier stage in life. By being proactive with lifestyle changes, you can help your fibromyalgia symptoms and prevent cervical stenosis too.

The importance of flexibility and load bearing exercise

The primary non-surgical treatment for cervical stenosis is pain management and exercise. Physical therapy and exercise the focuses on increasing flexibility, along with load bearing and strength building help to relive pressure on the spinal cord.

It is also the lifestyle change that is most recommended to those with fibromyalgia to help relieve symptoms. Building your strength, as well as maintaining your flexibility not only increases your ability to support you upper body and relieve pressure on the spine, it also encourages the lymph system to work more effectively – which helps your immune system.

Making sure to determine if cervical stenosis is present